So, here's the deal. Anyone who follows me on social media or who talks with me for any length of time IRL knows that there are a lot of cats in my life.

That's not really on purpose.

I mean, I like cats, a lot. They're definitely my favorite animal. If I were an animal, it would be a black cat. I've had cats as pets since I was 10.

But... this is a bit more than that. See, the neighborhood I live in has a lot of feral cats. Probably when people moved out of houses they left cats behind, or just dumped them in the empty lot/farm down the street, and then they had babies, and now there are just many cats.

We feed some of them, and several of our neighbors also put out food, and we've trapped 7 and taken them to the Feral Cat Coalition of Oregon to get them fixed.

Here's the cast of characters:

Frankie Meowface - RIP, bestest of cats. Frankie showed up several years ago, and, unlike everyone else in the neighborhood, she was definitely a stray, not a feral (that is, she was super into humans; feral cats have not been socialized with humans). She pretty quickly learned 1) that we were suckers, and 2) how to get into the house - including via the skylight. And then she determined that it was definitely her house, and we were her people. But she was also a sweetheart to everyone and maybe a bit of a party girl - she would hear clinking of bottles at our neighbor's and run across the street to join the party. One neighbor called her the "neighborhood strumpet." Devastatingly, Frankie was hit and killed by a car in April, 2017. 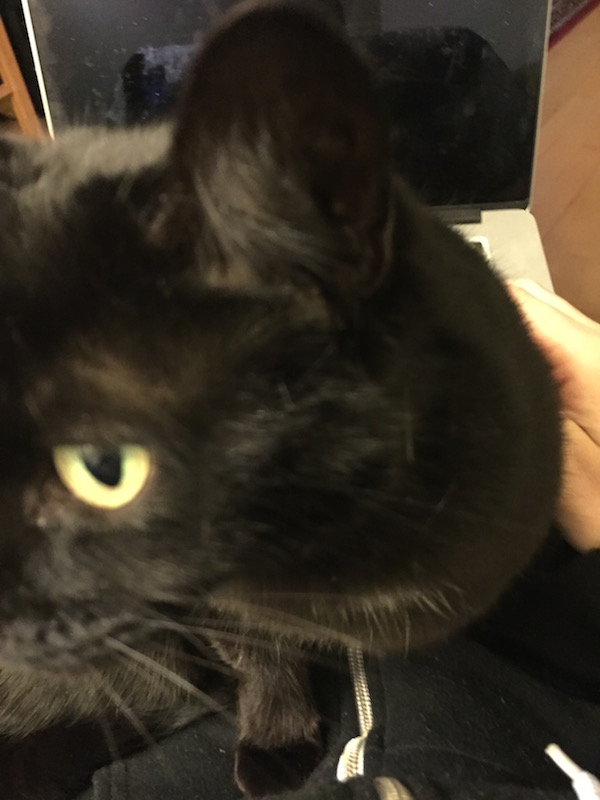 Willa's been around for awhile, probably the longest of the current roster of cats. Originally known as "Leroy's girlfriend" because she would follow Leroy (the giant orange feather duster who eventually moved away) around the neighborhood. Sometimes she'll see us coming around the corner and will follow us home and then ask for headbutts - we put our hand out and she butts her head up against it. And then sometimes she gets feisty and instead she whaps at your hand with her paw. Her ear is tipped, so at some point someone must have gotten her fixed.

Gremlin was very grumpy, kinda gross (or at least a gross eater), and a reluctant mother. She had two adorable tuxedo kittens, Muffin and Mogwai, somewhere near our backyard, and we saw her watching over them several times back there. Once they got old enough to eat dry food, she showed them the food on our porch, and then not too long after that she took up residence on the office chair on the front porch, and got really annoyed when the kittens still tried to follow her around. Unfortunately, the FCCO discovered that the wound on her face was really an infected tumor, and so they put her to sleep.

Little asshole cat. Has the best faces - mostly of the grumpy and "ohgodohgodohgod" variety, with occasionally very cute but totally begging. She rules the porch

Most adorable little tuxedo kitten and I love her so much and I just want to be her friend! She seems to be permanently catten (somewhere between kitten and cat) size. She follows Zero-Day around and it's so cute. Sometimes they eat from the same bowl. She's pretty bad at eating - when she was a kitten and we used to put out food in tupperwear containers she would push the container all across the porch (which is why we finally got some ceramic cat food bowls). Sometimes we don't see her at all for a few days, and then she'll show up again and meow for food (which is so cute omg).

The story of the three identical black tomcats

So alright, when we first decided to catch some feral cats and get them fixed, we only thought there was one black tomcat. We called him Glitch because if you saw him out of the corner of your eye you thought he was Frankie. Our cat-catching goals were to get Gremlin and the kittens, with a stretch goal of getting this tomcat Gremlin was hanging out with. Our first night of setting the traps, we caught Glitch and the two kittens, but had no luck with Gremlin. But then while the three of them were at the FCCO having their operations we put out more food for Gremlin... and A SECOND black tom showed up with her. Thankfully we managed to catch both of them (or so we thought) and take them to the FCCO to get them fixed, but then while MissingNo (the second black tom) was cooling his heels in our basement (i.e. recovering from surgery) we put out food and A THIRD black tom showed up (we knew it was a third cat because he didn't have a tipped ear). Goddamnit. We named him Zero-Day, and we realized that he was probably the cat we had been seeing with Gremlin all along, because the kittens seemed to be familiar with him (and Muffin still follows him around). We finally managed to trap him and get him fixed summer of 2017.

The first of the 3 identical black tomcats. Very skittish, although sloooowly becoming less so since he was fixed. He mostly hangs out on the porch across the street, but he's been coming over a bit more reliably, and he really seems to have chilled out. He can now sometimes be found flopped out on the porch stairs across the street. He's identifiable by his super pointy ears.

2nd of the identical black tomcats. Named after the most famous of the Glitch Pokemon. We caught him second (or so we think? honestly who knows - he was one of the first two, with Glitch). We haven't seen him since (unless we have?) - we think he was just wandering through and had a really bad day.

Big big big sketchy boy. A bit less skittish than Glitch, with less point ears and a wider face. Very big and very sketchy. He's got some scarring on his face from getting in fights. Often naps on our back picnic table; it took us a long time to catch him because he didn't often come by for food, just to sleep on the table. Muffin follows him around - she loves him soooo much and he seems to tolerate her. We finally trapped him and got him fixed summer of 2017. (And we didn't manage to get him the first day; we trapped Bruce and then didn't trap Zero until the next morning and had to make another trip to the FCCO for him).

Sketchiest cat; giant grey and white fluff. So named because one day we were walking home and he was up on the porch eating. He saw us and ran off to the side of the porch as we climbed up the stairs... but then he realized he was too big to fit through the porch railings so he had to escape past us down the front steps. He Tokyo-drifted down the first set of stairs then launched himself off the landing and onto the street. He's just this big ball of grey and white fluff! He was getting less sketchy but then in July of 2017 we finally trapped him to get his balls chopped off at the FCCO and we've only seen him a couple times since then.

A new edition, summer of 2017. Super fluffy and pretty! We don't know her story yet, but we think maybe she was someone's cat and they dumped her, but now she's been on her own for a while and so is pretty skitty. We might try to see if she'll become a people-cat again.

Okay, not actually a cat, and probably there's more than one, and we try not to feed it, but sometimes it gets food anyway and then seriously what can we do, it's a skunk. TBH it's pretty cute though.